Title of the series: Seppuku
Year: 2018, 2019
Seppuku is a form of Japanese ritual suicide by disembowelment. It was originally reserved for samurai but also practiced by other Japanese people, later on, to restore honour for themselves or their families. In this series that I have symbolically named them seppuku, I was trying to picture the daily struggle of us in either our personal or social life. You can never say that the women depicted in this series are good or evil, nor you can say they are alive or dead. The only thing you might notice is that each one of them is coming back from the battle that caused their gigantic butterfly wings to grow on their backs. 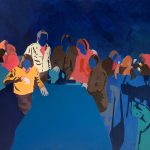 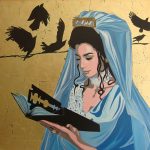 The edge of the bladePaintings & mixed media