Title of the series: Identity
Year: 2012 to present
This series is an ongoing project and I might add paintings to this series from time to time.
In these series, that I started at the same time with the series of “the blue backgrounds”, I am looking for a hidden identity, a borderless identity. As an artist always working on social and political themes and traumas such as war, suddenly after the immigration I found myself surrounded with new faces and new stories. This series is created in the result of displacement and the new visions one will understand after immigration. For instance, In one painting (that I have done in memory of the journalist “James Foley” who was beheaded by isis”) I imagined myself in his place. 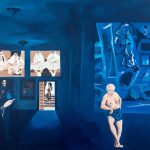 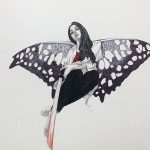