Self portrait
Duration: 7’:19”
Year: 2007-8
This is a video installation / video art
“In the video Self-Portrait (7 mins 19 secs, 2007-2008), Simin Keramati deals with her own female identity. Stylistically, she acts with a successful combination of text and image. According to Alphabetic conventions, written texts in both Persian and English appear from right to left and vice versa on the dark screen and seem to reflect Keramati’s personal handwriting. These seemingly diary entries make visible her personal thoughts and emotional states to the viewer: I do walk a lot these days; I just want to get rid of my thoughts. Later one can read that she poetically puts her mind under her feet while walking, and listen to the sound of footsteps and breathing. […] In the video, the two layers of her outer and the inner lives coincide with the activities of walking and the artist’s personal wish to break away from her thoughts. It is interesting that only the sound suggests that she is located outdoors; one can listen the rusting of leaves, which is eventually caused by her footsteps. […]”. (Julia Allerstorfer, Performing visual strategies/ Staci Gem Scheiwiller, Performing the Iranian State, Anthem Press, New York, 2013/ page183) 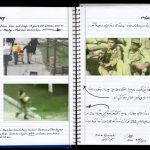 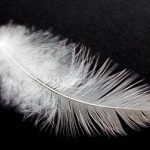